Suzi Perry is the face of MotoGP as far as broadcasting is concerned, and has been involved in motorsport for over 20 years. If anyone knows MotoGP and Formula 1, it is this friendly face.

Taking time out of her extremely busy schedule, Perry spoke to CLICKON about the future of motorsport and how it needs to adapt in order to continue being a success.

“In MotoGP, anything can happen. You cannot call anything. It is all very much about speculation and lots of ifs and buts. You know that you are just going to be treated to an incredible spectacle and you’re lucky enough to have a patch on your neck and you’re right there in the heart of the action. It is an extremely privileged position to be in.” 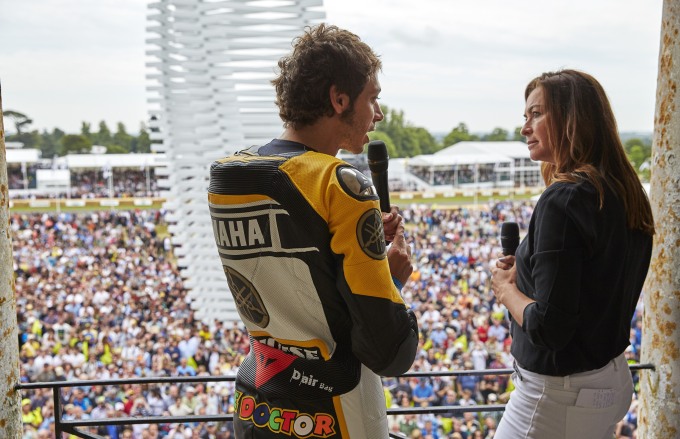 Perry presented MotoGP for  13 years at the BBC, as well as more recently leading the F1 team along with co-presenters David Coulthard and Eddie Jordan. Perry has seen the immense changes that have taken place in each sport, concluding that Formula 1 desperately needs closer racing.

“They’re two very different sports in my eyes, but I don’t think they always have been. MotoGP reacts carefully whereas Formula 1 has a habit of acting instantly and coming up with sticking plasters rather than actual solutions for the problems.

I think fans are finally starting to see through that and have become slightly disillusioned with the lack of entertainment on track. There’s always such interesting things to talk about with Formula 1 but, unless you are seeing anything riveting on track, ultimately viewers do get a little bit fed up.”

Recent changes to Formula One, including the appointment of Ross Brawn in a pivotal role should see Liberty Media’s vision for a more entertaining championship take off, with fan feedback crucial to the process.

“They want to see entertainment. They want to see closer racing and MotoGP has that right now. It has closer racing, it has more than one front-running manufacturer at the sharp end. You get to see lots of battles on track, it is completely entertaining throughout the whole race. Formula 1 is different. Naturally, it’s different, it’s big cars in the formula it takes. You are never going to see that amount of overtakes in Formula 1 – it would be stupid to try and compare the two in that respect. I think ‘God, these are two great motorsports, why don’t you just watch them both?”

MotoGP saw nine different winners last season as opposed to Formula 1’s four. With a figure that is more than double, MotoGP gives fans what they want – racing. With this, Perry was keen to share her visions for Formula 1’s future to ensure that it continues being the pinnacle of motorsport.

How Formula 1 now acts long term is important. I think they will get there because you’ve got people at the top there now that recognise what needs to happen. I am just aware that there are a lot of rules and contracts in place for the next three years – I don’t think we’ll see huge changes over the next few seasons, but we’ll see small changes.”

The wheels are in motion, with talks surrounding a financially fairer playing field, format alterations and regulation changes all currently open discussions.

“I reckon they’ll address the DRS issue, and you’ll probably lose the shark fins and things like that. The media is already opening up to more sharing-nature which really is how it needs to be, with the way people digest their content. It is interesting at the moment for Formula 1, it is at a huge crossroads and it has to decide what it is going to do.

Is its priority being an entertaining sport? If it is, then we have to see closer racing. If it is to align itself with road cars, which I personally don’t think it should do, then they are still going to encounter all sorts of problems.

Whilst they need to keep an eye on that, they do need to look at the entertainment value. And they will. Ross Brawn – he’s all over it. As soon as he can make the changes he needs to, it will happen.”

Perry was also enthusiastic to reflect on the past of Formula 1 and how that differs to now, emphasising that the entertainment factor needs to be brought back.

“Motorsport needs to be entertaining. I know I have used that word several times, but that is it in a nutshell. Once you lose the entertainment people start to talk about the lack of noise, the lack of ambience, the lack of atmosphere, which are things that you just expect from motorsport. In the past, they have just been a given. You never discussed it, that was just how it was. You went there and you could feel the vibration of the engine in your heart and your head when you were watching racing.

With all that under where it should be, people start to look at other things. Anyone that is doing a motorsport should primarily look at the entertainment factor otherwise you won’t get people watching it. Of course, there are going to be people out there that are going to completely batter my argument down but I think the purists are a much smaller market than the big entertainment market which is required for sponsors.”

But with that, comes the question of money and its distribution.

“Ultimately, this sport has to be paid for. Whichever way they choose to distribute their money, that has to be done fairly and it has to be done in the right way. That is another difference between MotoGP and Formula 1. The money distribution is different. In MotoGP they will give money to the smaller teams to closely align them with the factory teams so you do get the Cal Crutchlow winning races.

You rarely see that in Formula 1! Giving all of the money to the top teams, it just doesn’t make any sense. It absolutely widens the gap and I don’t see that changing at least for the next few years. As soon as the agreements come to an end, things will get broken down, stripped back and it’ll be like starting again.”

With the loss of the German Grand Prix from the F1 calendar and Silverstone’s future in doubts, the roots of the sports and the tracks it graces have been a hot topic for discussion.

“If you completely go away from the heritage of motorsport, it loses its soul. For me, it loses its reason for being. That said, the world is smaller than it has ever been and if countries want to embrace motorsport that have never been thought of, then that should also be looked at.

I know Thailand is probably going to come on the MotoGP calendar, that is a massive market for bikes. It makes sense to go and do a race in Thailand; the world superbikes have been going there for three years. It has worked for them.

Yet, the whole thing is a business model that you need to rip apart. You have to have a balance between old tracks and the new tracks that are coming up. The new tracks need to be good, they can’t just be ones that are generated on computer software. If it doesn’t generate good racing, then how long are people going to want to go to that track for because they know that they won’t get any racing there.”

Suzi Perry draws some strong parallels and stark differences between the paddocks of MotoGP and Formula One. Both are hotly anticipated in 2017, one is hoping for a repeat of the entertainment factor it enjoyed last season, the other has huge change on its horizon and a different winner in the opening race teases at a title fight between giants in 2017.