Donald Trump is a man that uses bad press to his advantage, well here is another slice for you Mr Trump.

In a recent piece for The Washington Post, writer Ben Terris examines the Republican candidate’s reputation as a cheat on the golf course. Reports from former Sports Illustrated editor Mark Mulvoy and rock singer Alice Cooper, don’t paint Trump in a good light when it comes to fair play on the course. 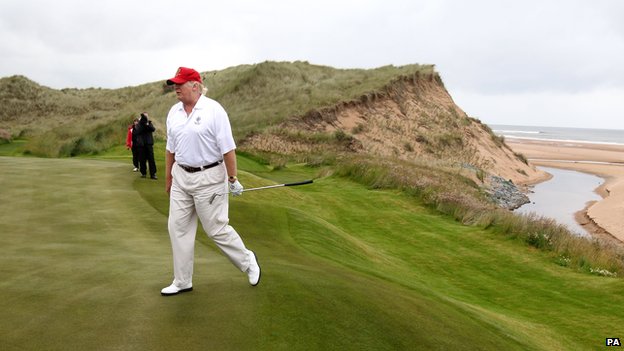 The most damming story comes from Mark Mulvoy who was playing with Trump one morning in the mid-1990s, they were on the 6th hole when the skies opened, and they ducked for cover under a nearby awning. The rain let up a few moments later, and Mulvoy, then the managing editor of Sports Illustrated, returned to the green. When he got there, he found a ball 10 feet from the pin that he didn’t remember seeing before the storm.

“That’s me,” the real estate mogul said, according to Mulvoy.

“Donald, give me a f—— break,” Mulvoy recalls telling him. “You’ve been hacking away in the g—— weeds all day. You do not lie there.”

“Ahh, the guys I play with cheat all the time,” he recalls Trump replying. “I have to cheat just to keep up with them.” Alice Cooper referred to him as “The worst celebrity golf cheat? I wish I could tell you that. It would be a shocker. I played with Donald Trump one time. That’s all I’m going to say.”

In Trump’s defense, he’s not the first politician to be accused of dishonest play. U.S. Presidents John F. Kennedy and Bill Clinton, both stricken with the golf bug, reportedly weren’t models of integrity on the golf course.