1. When Kanye West Stopped A Concert After Disabled Fans Couldn’t Stand Up

Kanye West stopped one of his shows in Sydney, Australia and demanded that the audience get on their feet, not realising that two of his fans were in wheelchairs. The rapper persistently heckled for both fans to stand and insisted on seeing his entire audience on their feet dancing, saying to the crowd “I can’t do this show until everybody stands up. Unless you got a handicap pass and you get special parking and sh*t.” After his words, he spotted the two fans again and demanded that they stand or he wouldn’t continue the show. One fan eventually waves a prosthetic leg in the air to signal to West that he was disabled. When West realised his mistake, he quickly moved on to the second fan, who also had to explain his disability. A video of the incident went viral and disability campaigners demanded an apology on behalf of the fans involved.

Kanye West forever went down in awards show history back in 2009, at the MTV Video Music Awards when the rapper, in the middle of the live ceremony, interrupted Taylor Swift’s speech for winning the moon man for Best Female Video.

The pop star, Taylor Swift had just happily won the award for her video to the track “You Belong with Me,” which ended up beating out Pink’s “So What,” Kelly Clarkson’s “My Life Would Suck Without You,” Lady Gaga’s “Poker Face,” Katy Perry’s “Hot n Cold” and of course, Beyonce’s “Single Ladies (Put a Ring on It).” When Swift graciously, yet excitedly went up to accept her award at the awards show, the controversial rapper stormed the stage and took the mic from Swift before she even got to finish her speech. With Swift in complete shock at what was unfolding, West turned to the crowd and said, “Yo, Taylor, I’m really happy for you and I’ma let you finish but Beyonce had one of the best videos of all time.” The interruption wasn’t well received by music fans and celebrities alike in the audience and West was showered with a sea of boo’s. The incident sparked an ongoing feud between the two artists that is still alive today. 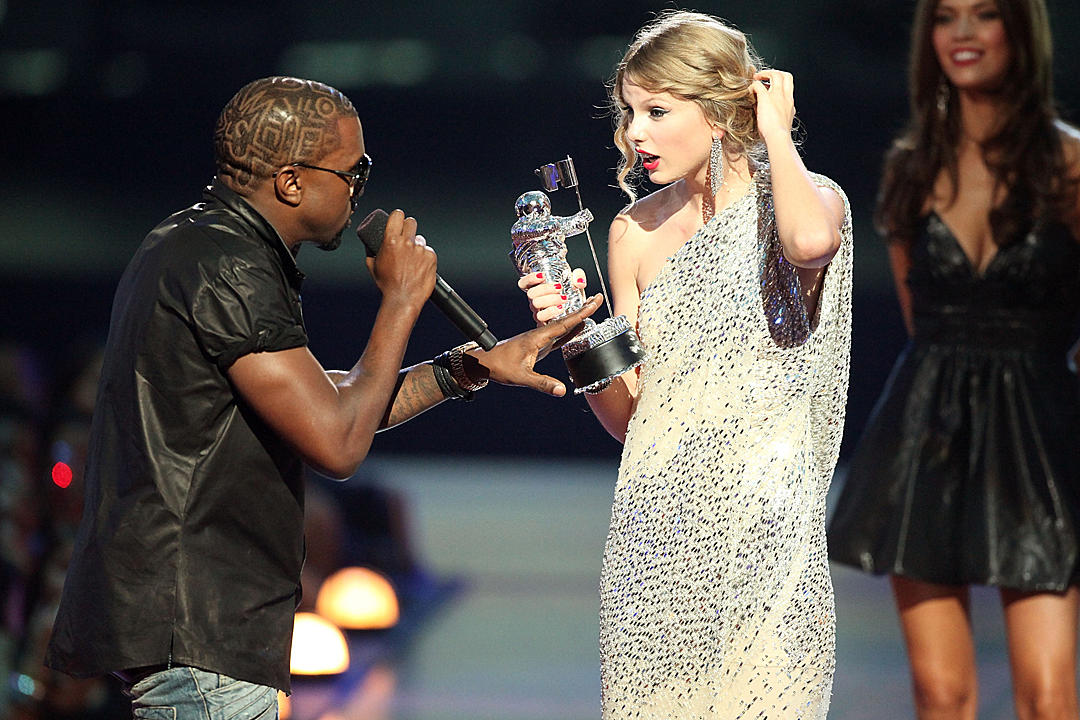 Kanye West came under fire after delivering a speech in support of President Donald Trump during his Saturday, September 29, appearance on Saturday Night Live. The 41-year-old rapper wore a red Make America Great Again hat as he sang praises Opens a New Window. of the commander in chief, 72, during the closing credits of the show’s season 44 premiere.

When asked about the incident, the rapper explained “They bullied me backstage. They said, ‘Don’t go out there with that hat on.’ They bullied me and then they said I’m in the sunken place!” he said. “I think the universe has balance. 90 percent of news are liberal. 90 percent of TV, L.A., New York, writers, rappers, musicians, so it’s easy to make it seem like it’s so, so, so one-sided.” he continued, “The blacks want always Democrats, you know, it’s like the plan they did, to take the fathers out of the home and promote welfare. Does anybody know about that? That’s a Democratic plan.”

The rapper recently caused a lot of controversy when he tweeted out his support for Donald Trump, no doubt attempting to stir up a huge amount of hate from his fans, who argue that the President has been harmful towards marginalised people across America. The incident caused West to lose a record of nine million followers in only eight minutes, with some of those including his own family members, such as Khloe and Kourtney Kardashian, and Kendall and Kylie Jenner.

When asked about his support for Trump in his TMZ interview, Kanye simply responded with “I just love Trump, that’s my boy.” He later then lamented that he felt a certain freedom in “doing something that everyone tells you not to do,” as if this rebellious desire was justification for his Trump support.

During a video interview with he had with media company, TMZ about his tweets, West openly discussed his take on the history of black slavery when he stated,  “When you hear about slavery being around for 400 years. For 400 years?! That sounds like a choice. Like, you was there for 400 years, and that’s all of y’all.”

The video quickly went viral all over social media, and eventually resulted in an apology from West himself.