For most people, their favourite sweet indulgence is easily chocolate, and now there’s a strong chance we could owe everything that is chocolate to Central American Aztec and Mayan people that lived nearly 4,000 years ago – At least that’s what archaeologists have long assumed. But in a new twist, a renowned international team of researchers has now uncovered evidence that the plant from which chocolate is made from was first actually cultivated in South America 1,500 years earlier than previously expected.

“Today we all rely, on one extent or another, on foods that were created by the indigenous peoples of the Americas,” says Michael Blake of the University of British Columbia, co-author of a new study published in Nature Ecology & Evolution. “And one of the world’s favourites is chocolate.”

The process behind making the chocolate that we’ve all grown up to know and love is fairly simple in the chocolate world. The chocolate, which is said to come from cacao beans, grow inside large pods on cacao trees. Once the beans are harvested, they are usually left to ferment for several days and then dried out. The dried out beans are then roasted and ground out until liquid is extracted. The liquid that comes out of this process becomes the cocoa butter used to make your favourite chocolate bar. Then, any residue that is found is turned into cocoa powder.

In the past, Archaeologists have typically dated the first use of cacao as a whole to Central America around 3,900 years ago. Although, this particular assumption has been questioned by various historical accounts in the past, indicating that in pre-Columbian Mesoamerica, natives dried and ground up cacao seeds to make gruels and beverages. Cacao seeds were a form a currency and regularly traded, so it’s said that large plantations may have in fact sprung up to cultivate them. For many years, Cacao also played a central role in the region’s mythology, and various Mayan texts and Aztec drawings prominently featured cacao. For Blake, the co-author of the study, and his collaborators, this suggested that perhaps South America, rather than Central America, was the origin of chocolate. 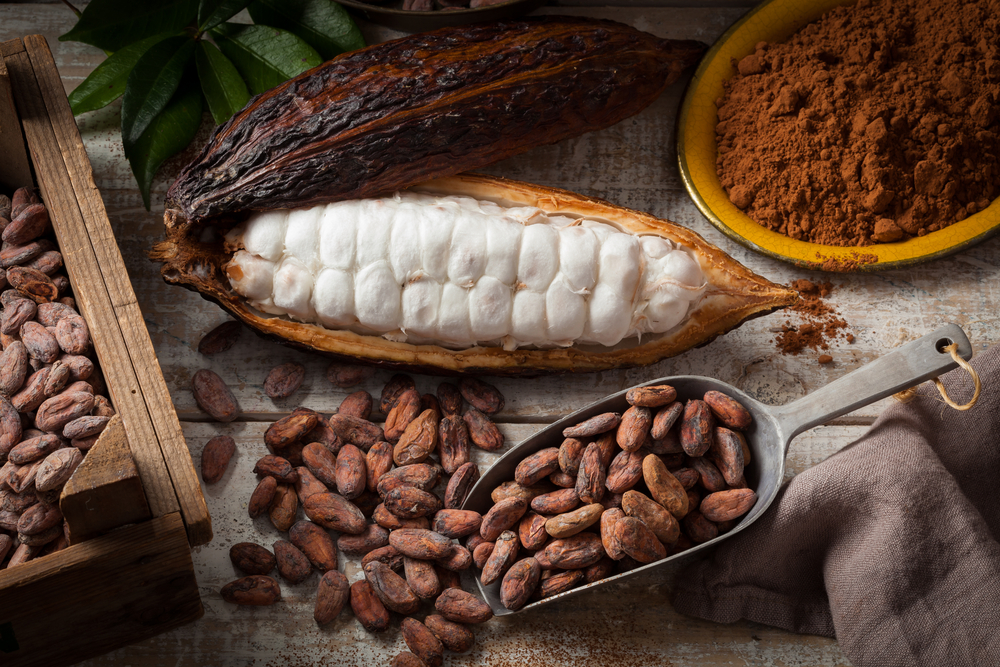 Following the link, Blake and his colleagues quickly examined numerous ceramic artifacts from a Mayo-Chinchipe research site in Ecuador known as Santa Ana-La Florida, in which was first discovered by archaeologists in 2002. Radiocarbon dating places the initial occupation of the village between 3,305 to 5,450 years ago. While looking for more information, the team first looked for telltale starch grains which are usually found in most plant tissues, including cacao. On their search, the team found evidence of the grains in the charred cooking residues inside some of the ceramic shards and on the surface of stone artifacts (bowls, mortars, and pestles) among other things, which is shown as a large clue that cacao was used in the village after all.

“The use of cacao was something that caught on and very likely spread northwards by farmers growing cacao in what is now Colombia.” said Blake.

Next, the group conducted a genetic analysis where Blake and his partners were able to identify fragments of ancient DNA in the residue, unique to this type of cacao tree. Finally, there are a number of chemical compounds in cocoa, most notably the flavanols, caffeine, and a bitter alkaloid called theobromine. It’s the latter that is relevant to the current study, since it is found in cultivated but not wild varieties of cacao. The team found the telltale chemical fingerprint of theobromine in the residue in several ceramic vessels.

“These three methods combine to definitively identify a plant that is otherwise notoriously difficult to trace in the archaeological record, because seeds and other parts quickly degrade in moist and warm tropical environments,” says lead author Sonia Zarrillo of the University of Calgary.

Based on those findings, the team confirmed that both cultivated and wild cacao were in common use by the Mayo-Chinchipe villages between 2,100 and 5,300 years ago, which was set at least 1,500 years earlier than previously assumed and implied that the Upper Amazon region would be held as the oldest centre for cultivating cacao known to man to date.

Along with the discovery, Blake stated “This suggests that the use of cacao, probably as a drink, was something that caught on and very likely spread northwards by farmers growing cacao in what is now Colombia,” and that it “likely spread via trade to Panama and other parts of Central America and southern Mexico.”