It’s no secret that there are copious amounts of myths about acne and they are almost as common as the skin problem itself. While the exact cause of acne is unknown, there are now a number of factors that have been proven to have the potential to bring on acne or make it worse, including hormones, genetics, and emotional stress. Recently, there have been a number of studies where dermatologists have taken yet another look at whether your diet’s role in acne is a myth or not.

As the result of the recent boost in awareness and curiosity, several new studies have been conducted to get to the root of the issue and fully examine the possible link between diet and acne, if there even is one. The study at hand specifically focused particularly on carbohydrates and dairy products, and since taking place, a number of emerging evidence has prompted dermatologists to reexamine the possibility that certain foods can worsen or trigger acne in patients of all ages. However, a wide range of dermatologists also agree that diet should not be used as a sole treatment for acne but rather as a complement to proven acne treatments.

Researchers at one of the National Institute for Health Research’s Biomedical Research Centres, based at Guy’s and St Thomas’ NHS Foundation Trust, conducted a genetic study of almost 27,000 people, as the Guardian reports; 5,602 of the participants had severe acne. The study specifically singled out genetic variants that appeared most frequently in the participants with acne. Among those variants, a significant amount of participants reacted negatively by having a reaction to the crucial way hair follicles develop. 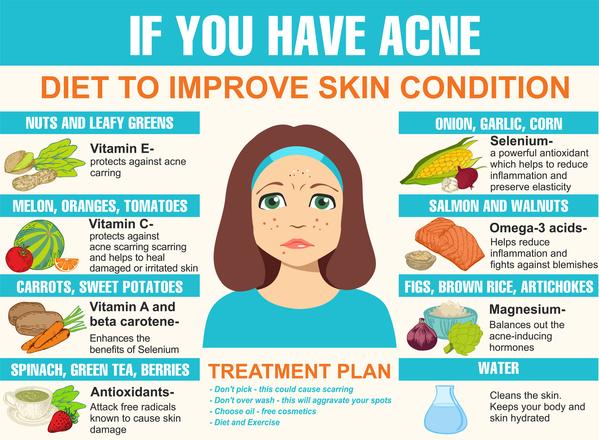 So, what exactly did the study discover? The scientists involved in the study concluded that certain hair follicle shapes result in “a follicular environment prone to bacterial colonisation and resulting inflammation” which basically means that certain people are more likely to trap bacteria in their skin and as a result cause acne breakouts. While a number of previous studies have previously established the influence of genetics on a person’s susceptibility to acne, this is the first official study to isolate the development of hair follicles as a cause.

According to Professor Jonathan Barker, a consultant dermatologist and the study’s lead author, the findings could result in significant progress in acne treatment – the field in which has stagnated for decades. Professor Jonathan Barker commented to news publication, the Guardian saying, “Applying these genetic approaches to acne has never been done before, and it’s a significant leap forward” he continued, “When you have insight into the genetic basis of a condition, you can develop much more effective treatments.”

According to the NHS, the most commonly prescribed medications to combat acne include topical and oral antibiotics, the oral contraceptive pill, topical retinoids, and the teenage staple benzoyl peroxide. The current available medications to treat acne tend to focus on fighting bacteria and reducing inflammation but victims hope that future acne treatments could target the very root of the problem by focusing on the development and maintenance of the hair follicle itself and thus preventing the build-up of bacteria.

Another scientists, Dr. Bowe of the American Academy of Dermatology has commented on the findings, saying “Based on the studies we now have available, the evidence suggests that diet does play a role in acne,” he continued, “More studies are definitely needed in this area, but they are not easy studies to execute. Patients can be their own best detectives in determining possible food triggers for acne, and I encourage them to make an appointment with a dermatologist if they have any acne concerns.”