The newly popular internet provider Cox is now offering a new $15 per month subscription service that it dubs Cox Elite Gamer, an internet bill add-on that the company that claims will optimise the connection between players and video game servers for hugely popular trending games such as Fortnite, Apex Legends, and Overwatch, just to name a few. So what exactly could this mean? Well, for customers who sign up for the service, Cox says it will seek out the most efficient path to a game’s server. Theoretically speaking, this could path could result in reduced ping and a lower latency, which is a huge factor in any shooter based game. To put it simply, players would experience less lag.

The Federal Communications Commission (FCC) recently did away with regulations that prevented internet service providers (ISPs) from discriminating against certain kinds of internet traffic. Many believe that the repeal of so-called “internet neutrality” will eventually open the door to tiered bandwidth plans, where customers will be required to pay a premium for “fast lane” access to certain websites. 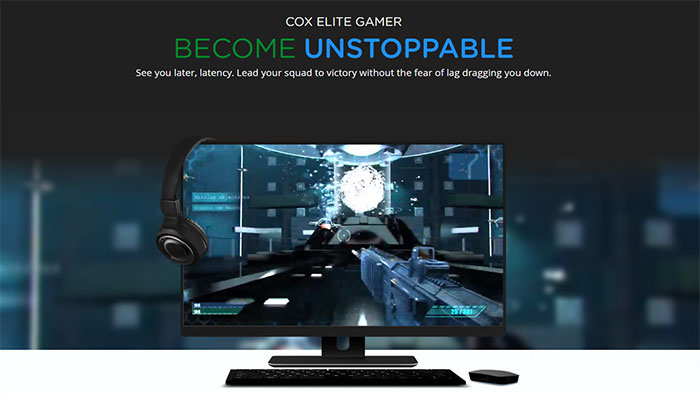 Of course, not everyone believes that an “add on” subscription could be the answers to the battle of nasty game lag, but the chance to try it is available now for a small amount of gamers. The test of Elite Gamer is currently only available only in Arizona, and only for Cox customers already paying $59.99 per month for a 100 Mbps internet plan. Marketing materials promise 34 percent less lag, 55 percent fewer ping spikes, and 45 percent less jitter (also referred to as packet loss). Users can install software on their gaming PC, and Cox takes care of the rest.For the most part, it could be a simple resolution for a major problem to a lot of gamers globally.

Cox Elite Gamer doesn’t actually speed up your internet connection itself; the ISP has stated that “it does not alter speed in any way, nor does it prioritise any traffic over others on our network.” Cox doesn’t want people thinking of this as a “fast lane.” Instead, it’s about cutting down on congestion and the number of hops between your gaming PC and whatever server you’re trying to reach.

Naturally, many people on Reddit are also expressing views of high skepticism of Cox Elite Gamer subscription. Cox claims subscribers can “control their connection from end to end,” but the company simply may not have the sort of infrastructure to ensure that promise. While the idea of the subscription is a much needed addition to the gaming community, many reddit users have pointed out that Cox has no say on what happens to your gaming activity outside of its own network, making the service network-specific and driving more business into other avenues of the company. The new gaming service has also already received a fair amount of criticism from consumers. Many customers fear that Cox will slow down the Internet connection for gamers who have not paid for the service. Although Cox claims that their new service is not a “fast lane”, there does seem to be some form of usage prioritisation. Others have argued that Internet companies could begin charging customers for faster access to video and music streaming services.

Additionally, this isn’t the first time we’ve seen technology like this floating around the internet. According to Todd C. Smith, executive director of media relations for Cox, Elite Gamer technically isn’t actually entirely Cox’s own product, or at least the idea behind the product. It’s a rebranded version of another company’s existing technology. Founded in 2009, WTFast offers the exact same service for the exact same price to everyone, regardless of who their ISP is or how much bandwidth they’re paying for.

The variety of the subscription service, if received well, could also mean room for more companies (and competitive pricing) to be implemented in the field.