Pokemon has been one of the most popular animated series in the world since its release in 1996, and has since grown in popularity and gained a number of collectibles in the process – some however, worth more than others. Some Pokemon memorabilia has been known to sell for big numbers, although the most interesting sale would have to be of the extremely rare Pokemon card. In August 2018, someone on eBay paid $60,000 for a very rare Pokemon card, and while that in its own is impressive enough, it’s now almost a year later and the card still hasn’t arrived, and nobody seemingly knows where it’s gone to.

YouTuber and Pokemon card collector smpratte has the story (via CNET), as he claims to know both the buyer and seller personally. What appears to have happened, smpratte says, is that having sold the card for $60,000 last year to someone outside the US, the seller posted it domestically, after which the card was forwarded to a Global Shipping Program centre in New York City.

The card was signed for, valued at $50,000 for insurance purposes—the highest figure possible—and was supposed to then be sent on its way. However that’s where the card’s journey ends, as no further tracking was ever noted, and no trace of it has turned up since.

The card in question is a “Trainer No.3″ (pictured below), one of the rarest in existence, which was given out to third-place finishers at a “Secret Super Battle” in Japan in 1999. smpratte guesses that the card went missing at the New York GSP office when someone noted the insured value of the package, but there’s no official proof of that as of yet, a whole year later. 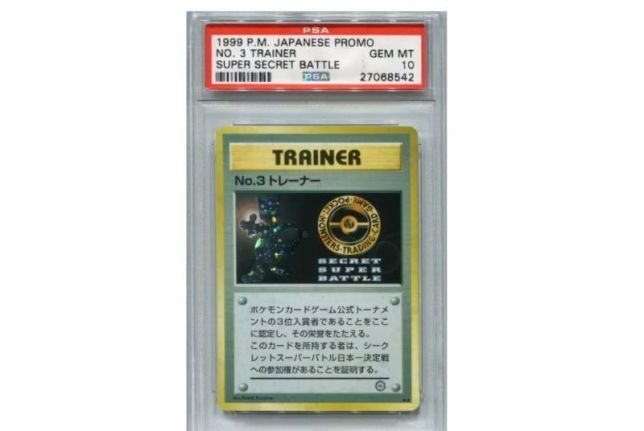 The seller, Pokemonplace says it sent the card, sealed in a plastic container with a unique holo pattern, to Aramex via USPS, with $50,000 insurance. Aramex signed for a bulk lot from USPS that was supposed to include the card–but Aramax says Trainer No. 3 wasn’t in the delivery, which included a medley of other items as well. Right now, no one has a clue where it is.

“My responsibility was to ship the card to Aramex […] a middle man company that then ships the card to the buyer,” pokemonplace said. “The tracking information I have was with registered mail and shows tracking and a signature. Aramex claims they haven’t received it and signed for a bulk lot.”

Avid collector and Pokémon card enthusiast smpratte has also theorised what might have happened to the package, though currently has no proof to support the theory. Additionally, Smpratte thinks someone saw how much the card sold for and thought to bank on the paperboard’s price tag. Unfortunately, attempting to re-sell the rare Trainer No. 3 is impossible due to its originality and recognition in the fandom, not the mention the high media coverage it’s accumulated. You can check out his in-depth theory in the video below.

Pokemonplace is also offering a generous $US1,000 bounty for anyone who can locate the card and help return it to the original buyer. According to Polygon, the victims aren’t looking to punish the potential thief, they just want the card returned.